Just Eat said it will use the proceeds to strengthen its balance sheet and repay debt while still pursuing a partial or full sale of its Grubhub business.
Private Equity

While a number of potential buyers are studying Grubhub, it’s unclear which will decide to proceed with formal offers.

Just Eat Takeaway.com NV said it’s considering a partial or full sale of its Grubhub unit less than a year after buying it for $7.3 billion, in a reversal that highlights how the end of the pandemic has turned the food delivery industry from a hot property into a struggling sector.

The Amsterdam-based company said in a statement it’s exploring strategic actions for the U.S. division, just as it’s losing an unusually high level of customers across its key markets. Months after the transaction closed in June, Chief Executive Officer Jitse Groen said the business would be an important part of industry consolidation. A transaction has yet to materialize.

Just Eat isn’t the only pandemic darling changing course to cope with customers’ post-lockdown freedom. Netflix Inc. posted its first subscriber drop in a decade, prompting co-founder Reed Hastings to introduce advertising to the streaming service after years of saying he wouldn’t. Peloton Interactive Inc. will raise the price of a monthly subscription, which gives owners of its stationery bike access to virtual classes, for the first time in eight years in a bid to boost revenue.

However, Just Eat is facing deeper questions on its strategy. Groen has been touting a turnaround plan that featured activity on Grubhub as well as expansion into groceries and building out its own courier network. Shareholders have been lobbying for quicker action around its assets, and pushing the company for clarity on how it’s developing other parts of the business.

Pressure on the company intensified last week when investor Lucerne Capital Management said it planned to vote against the re-appointment of the food delivery company’s chief financial officer and supervisory board at the annual general meeting in early May.

In recent months Groen has said outside investment in Grubhub could be feasible, including from private equity or strategic partners. Bloomberg News reported in January the company was open to a sale of the division.

The announcement that a sale is now a possibility meets difficult timing. Bernstein analyst William Woods said he “struggles to see a deal materializing” for Grubhub as it is complicated to identify a suitable suitor for a business that is declining, losing share and restrained by fee caps.

A worse-than-expected 1Q slowdown means even reaching Just Eat Takeaway.com’s lowered 2022 growth goal and return to positive adjusted Ebitda in 2023 requires stemming the number of clients lost after the lockdown boost and has added pressure to sell Grubhub and/or iFood to fund investment. Orders fell in 1Q, at 8% below consensus, on a sharp U.S. decline due to New York fee caps and weak office demand. 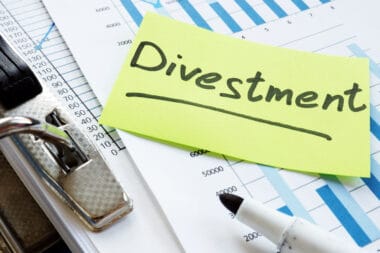